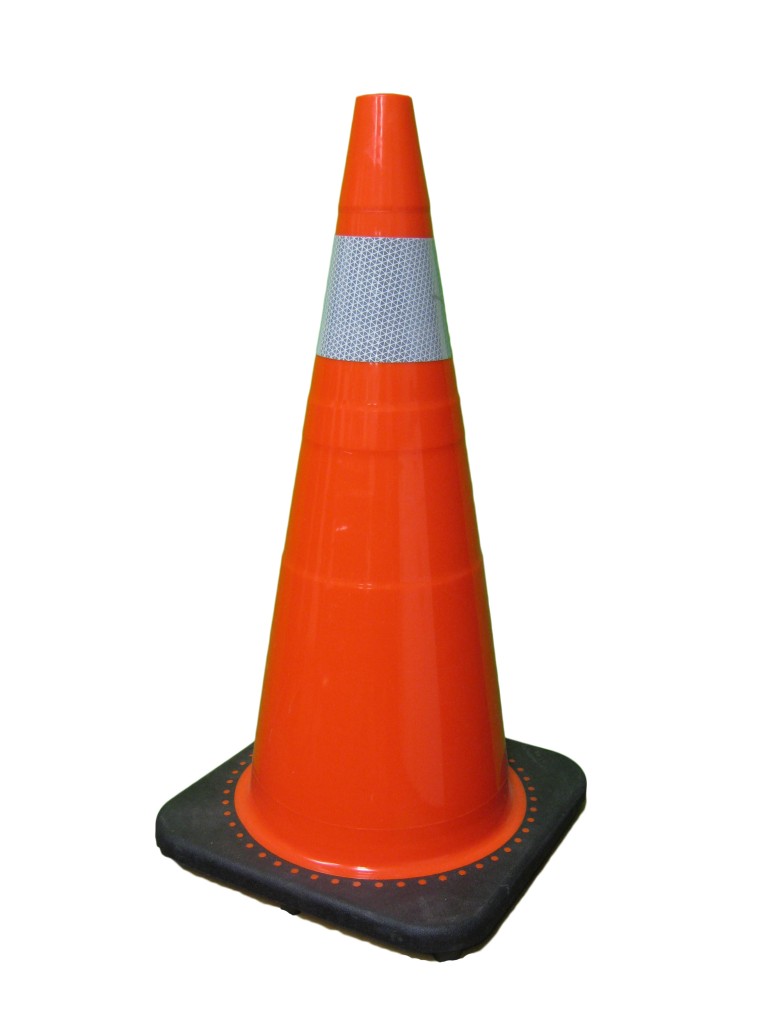 Each day on my morning drive I encounter three schools – elementary, middle, and high.  My commute spans four to twelve minutes, depending on the parents in the other cars.  The days of dropping off at the elementary school ended a few years ago.  I will save those days for another post.  Now, my youngest of three attends middle school.  I drive her to school mostly because of her large Baritone Saxophone that she carries back and forth to band and home.  Sometimes, it is so she can get there early to practice in the band room.

In the car circle at the middle school there is a very large, bright orange cone.  The simple, well established rule that we all learn during the first weeks of the sixth grade – pull up to the cone.  This very simple rule allows for the maximum number of cars to safely unload the precious little cherubs and keeps the line flowing at a tolerable pace. In the early part of the school year the administrator remains dutifully in the area, waving his arm, ensuring all parents learn the rule and all cars pull up to the cone.  This complex pull to the orange cone system has been in play for years at the elementary school, as

well.  So this concept should not be a shocker to anyone.

As the school year progresses the arm waver begins to disappear, leaving parents on their own to follow the rule.  Inevitably, parents fail to pull up to the orange cone in order to drop their own child off at the optimal point.  To be honest – the arm waver never really deterred the determined parents.  He served more as a reminder to those that try to do the right thing.  Clearly, not pulling up to the orange cone slows down the line, backing it up into the street, forcing unsafe traffic maneuvers by those not dropping off, and, quite frankly, takes a little more time off my life.  Rather than five or six cars unloading at once, only one or two let out their cargo before the line moves again.  This is not a new phenomena – parents thinking that their kids are too special to have to walk the ten to fifteen more paces than a less deserving child (see the aforementioned orange cone at the elementary school).

So why do we have rules?  Let’s go back to the basic of common courtesy.  Rules allow a society to function and exist.  At every school I see parents breaking the simple drop off rules for their particular school – and don’t even get me started on the chaos of daily pick up.  These are likely the same parents that get the email or phone call home that their entitled child cheated or cut class or hurt another child or was insubordinate….and they immediately take the side of the child, failing to even consider the ideas of integrity or honesty or true consequence.  Not only do these parents have the “not my child” attitude because they sit with blinders on, they also have the “my child is special and does not have to follow the rules attitude”.  After all, the rules are for the “lessers”.  Why should my child have to follow the rules?  They see me break the rules for them daily.  The rules clearly do not apply to us.

Similarly, why have rules in the house?  So kids know how to function within the parameters of the rules of society.  Life is not a free-for-all.  By not setting reasonable boundaries for kids and leading by good example – parents are setting their kids up for failure (or to be jerks).  True, there are successful liars and cheaters and jerks all over the world.  Everything in life is a trade off and I suppose, once again, it depends on perspective…what it means to be successful.  I want my kids to follow the rules, be considerate, have compassion.  I want my children to show empathy, help others, and be courteous.  I want my family to know love, security, and pride.  I do not want my children to think that the world owes them something.  I do not want my children to be entitled buttholes.